Add a Server to a Deployment

To add a server to an existing Deployment using a ServerTemplate.

Archive or Unarchive a Deployment

You can archive an existing Deployment to help manage and prevent excessive clutter in the RightScale Dashboard. This is typically done with Deployments you wish to keep, but are not at the forefront of your current work. This is an excellent alternative to deleting a Deployment that you think you might need again sometime in the future.

Steps to Archive a Deployment

The following should occur:

Steps to Unarchive a Deployment

Steps to unarchive a deployment are very similar.

The following should occur:

Note: Currently, this tutorial is specific to EC2 instances.

Note: You cannot change a running Server's Public IP address if it's locked.

To clone an existing deployment.

When you clone a deployment, you create an exact copy of a deployment's configuration too. The most common use case for cloning a deployment is for setting up a staging deployment for the purposes of further development and test. 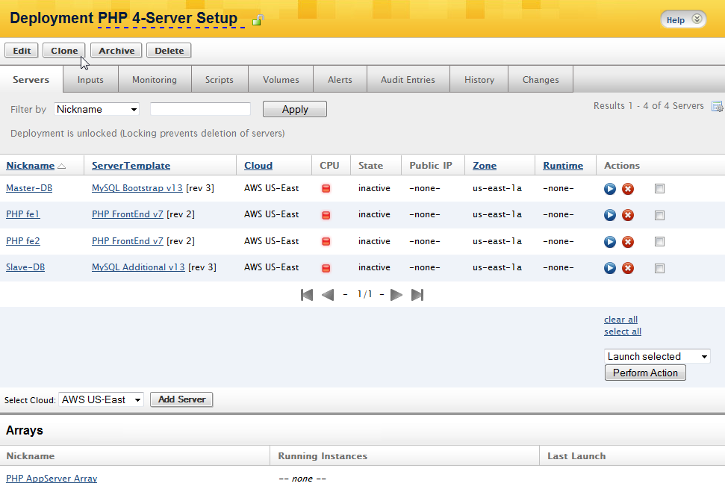 To create a new deployment in the RightScale Dashboard.

A deployment is a logical, user-defined grouping of servers. They can range from basic (e.g., a single server) to complex.

To delete a Deployment.

Delete a Server from a Deployment

To delete a Server from a Deployment.

Warning! When you delete a Server from a Deployment, it's permanently removed from the Deployment.

Export all Input information at the Deployment level to a CSV file so you can view and report on it from an Excel spreadsheet.

Generate and save data

Where the following brief data type description applies to each column:

To edit a Deployment's configuration.

You can change all of a Deployment's parameters. The Default parameters only affect new Servers that are added to a Deployment. Warning! You can have more than one Deployment with the same name in your account. For detailed descriptions about each field, see Create a New Deployment.

To launch a Server at the Deployment level.

You can either launch a server at the server level or deployment level. At the deployment level, you also have the option of launching multiple servers at the same time.

Launch an Instance in a Server Array

Lock or Unlock a Deployment

To lock or unlock Deployment.

When you lock a deployment, you cannot delete the deployment, any of its servers and/or server arrays. However, you will still be able to manage all other aspects of your deployment such as launching or terminating servers, as well as editing server and deployment configurations. If you are defining a mission critical deployment it is recommended that you lock the deployment once it's deployed.

Note: You can also lock a single server.

To terminate a running Server in a Deployment.

You can only terminate an unlocked Server.

To update the current input values of multiple running servers within a deployment.

With deployments that contain many servers, you may update the inputs on a selected number of servers for either the 'current' servers or the 'next' launched servers. Use this feature to manage your running instances by updating input values before running operational scripts rather than having to re-launch in order to update multiple servers at once.

Navigate to the index page of a deployment. Select your running servers using the checkboxes on the right. For large amounts of servers, utilize the toggles at the bottom of the page. 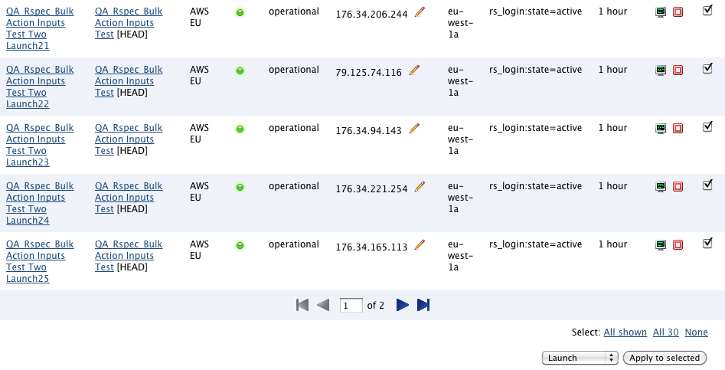 After making your selections, click 'Set Current Server Inputs' from the dropdown in the bottom right. Click Apply to Selected.

Edit the inputs of current servers

Under Bulk Inputs Update, the number of servers you selected is shown. The dropdown next to each input consists of two options that are unique to this flow: 'Unchanged' and 'Use deployment value.' When first viewing the page without making any changes, all the inputs will say 'Unchanged' by default to let you know that none of the inputs have been edited. Otherwise, use the other options in the dropdown to specify your value.

After making your edits, click the Show only changed inputs checkbox to filter only the inputs that were changed. Use this checkbox to confirm the changes you are about to make. 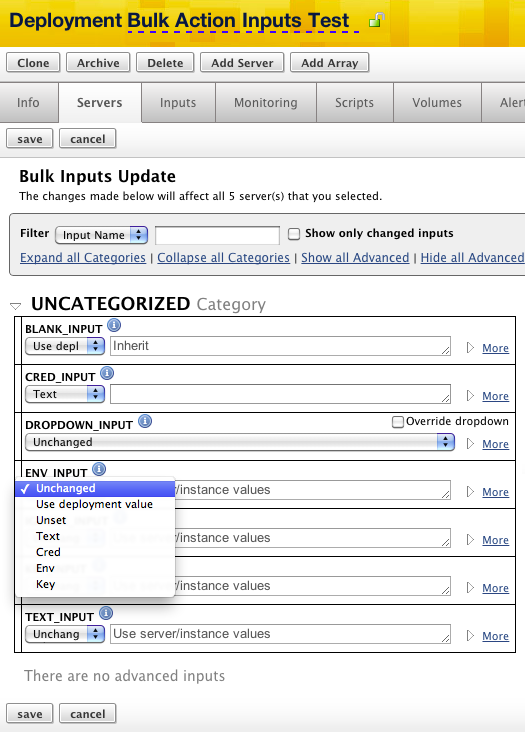 Make your edits and click Save. You will return to the Servers tab of the deployment.

Use Tags in a Deployment

Add or Remove Tags to Servers within a Deployment

To add/remove tags (bulk tagging) to multiple Servers in a Deployment.

The ability to tag multiple servers (bulk tagging) at the same time is a useful feature, especially if you use tags to perform operations on Servers across your Deployment(s) using the RightScale API. Bulk tagging is only supported at the Deployment level.

Go to Manage > Deployment > YourDeployment. Under the Servers tab, select which Servers you want to add the same tag to, select Add Tag(s) from the dropdown menu and click the Apply to selected button.

Next, enter the tag that you want to add. Add as many tags as you want. Be sure to specify if you only want the tag to apply to the current server or apply to all future (next) servers. This preference will apply to all tags that you add during this action. If you want to use separate preferences for a tag, you will need to repeat the process and add it as a separate action. 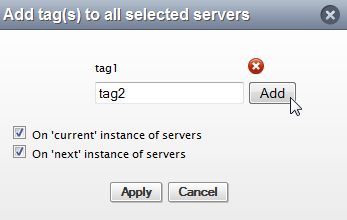 Unlike adding tags, you can only remove one tag at a time. To remove a tag, simply select which servers you want to remove the tag from, select the Remove Tag option, and click the Apply to selected button.

You will need to manually enter the tag you wish to remove and click the Apply button. 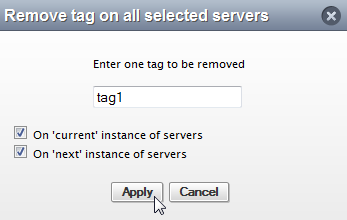 Run 'Any Script' On a Server

When a Server is running, you can run any of its scripts on-demand at anytime under the Scripts tab. A Server is designed to inherit its scripts from its ServerTemplate. Typically, the ServerTemplate will contain any relevant RightScripts for a particular server. However, you may need to run a script to perform a one-time upgrade to a running server or apply a patch across a set of servers. In such cases, instead of adding the script to the Server's ServerTemplate (which may not be possible if you launched the Server with a committed ServerTemplate) just so that you can perform a one-time operation, you can use the 'Any Script' option. The 'Any Script' option is useful if you need to execute a script that wasn't inherited by the ServerTemplate. For example, you might want to run a script from one of the 'Toolbox' ServerTemplates.

Select an 'Any Script'

Go to the Scripts tab at the level where you're going to run the 'Any Script' and click on the dropdown bar to open a selection window where you can select which RightScript you want to execute. Note: You can only use the 'Any Script' option to run a RightScript. It cannot be used to run a Chef Recipe.

Select the revision of the script you want to run and click the Run button.

Select which Servers the Script should be run on

Unless you are running the 'Any Script' at the Server level, you will be prompted to select which active Servers the script should be run on. (You cannot run an 'Any Script' on an inactive Server.)

Based on the result set of the filters you choose you can also select all shown, none or all *Number#* (where Number# is the total number of Servers in the result set. This is only displayed if pagination is involved in the Servers result set). Notice this feature can be very helpful in the event you need to patch all (or most all) Servers in your Deployment. For example, perhaps you have a change to make to the /etc/bashrc (or similar startup file) on 10 Servers in a Deployment, that use 3 or 4 different ServerTemplates. You could write a one-off RightScript to make the change, and run it as an 'Any script' against all the Servers in your Deployment. (There is no need to add the RightScript as an Operational script to each ServerTemplate, etc.)

Make your selection(s) and click the Run on selected action button when ready.

Select which action you wish to run.

Next, you will need to specify any missing input parameters.

Once all input parameters have been defined, click Run to actually run the script on the server(s).