When a ServerTemplate is published, its MultiCloud Images (MCIs) are also published. Most ServerTemplates are published with multiple MCIs. However, there may be situations where the ServerTemplate cannot be used to Add a Server to a Deployment in the cloud of your choice because the template's MCIs do not support those clouds/regions. In such cases, you can either create a new MultiCloud Image from scratch or modify an existing MCI. This tutorial explains how to do the latter (i.e. clone and modify an existing MCI).

For this example, let's assume that you just imported a ServerTemplate from the MultiCloud Marketplace that uses MCIs that only support AWS regions. However, you want to use the same ServerTemplate to launch instances in another private/public cloud that RightScale supports.

Important! Be sure to add the appropriate RightLink tag to the new MCI, which is the last step of the tutorial otherwise, scripts will not be executed correctly on the Server.

If you are adding an image for a private cloud, you must first upload the image to the private cloud itself before you can build an MCI that references it.

Go to the ServerTemplate's Images tab. Click on the MCI that you want to modify and add additional cloud support. The Clouds column shows all of the clouds/regions that are supported by a particular MCI. In the screenshot below, the MCI only supports the listed AWS regions.

Alternatively, you can also go directly to the MCI that you want to modify. (Design -> MultiCloud Images)

Since you cannot edit a committed revision of a MultiCloud Image, you must first clone it in order to create an editable version under Design -> MultiCloud Images. Click the Clone action button. Rename your cloned MCI. (optional)

Add an Image for Another Cloud

Click on the Clouds tab of the cloned MCI.

Click the Add button. Remember, as a best practice, each MCI should reference copies of the same underlying machine image. So, if you're adding an image for an MCI that's referencing RightImage_CentOS_5.4_x64_v5.6 images, you should only add a reference to an equivalent image in the newly added cloud. For example, it should have the same operating system (e.g. CentOS 5.4), system architecture (e.g. x64) and RightLink version (e.g. v5.6).

The information that's required to add an image will vary depending on the chosen cloud. Some examples are listed below.

After creating a new MCI, you must remember to add the following tag so that RightScale will be able to recognize and treat a launched instance appropriately.

Under the MCI's Info tab, add the following tag:

Now that you've successfully modified your MCI to support another cloud/region, you can use the MCI in other ServerTemplates.

By default, the version of an MCI will be incremented. For example, if you clone MCI v8 the new cloned version will be named MCI v9. Therefore, we recommend changing the name of the MCI to help better distinguish the cloned MCI from its ancestor. Under the Info tab, notice that we always show where an MCI was cloned from. 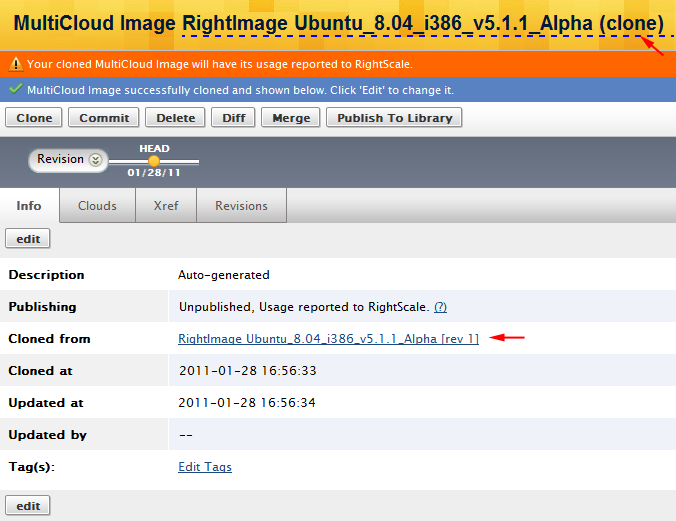 Although it's a recommended best practice to use one of the base RightImages that were published with the ServerTemplate, there may be certain conditions (such as long boot times) that require you to build a custom RightImage. In such cases, it's strongly recommended that you follow the steps outlined below, which will make it easier to receive support from RightScale's Support team. It's difficult to troubleshoot a server that was launched with a custom RightImage because identifying all of the changes that were made to the underlying image can be difficult.

RightScale's RightImages create a root disk on the instance that's 10GB in size. Data that is stored in the ephemeral drive or in mounted voumes is not preserved and is included in a bundled image. Therefore, you cannot include an attachment that is 10GB in size. If you want to include a package that is larger than 10GB in size, you can use a snapshot that will create and attach a volume to the instance at boot time.

The instructions below apply to EC2 machine images.

This procedure describes creating a new MultiCloud Image. A MultiCloud Image is a RightScale component that functions as a map or pointer to images in specific clouds and/or AWS regions. Each ServerTemplate may reference one or more MultiCloud Images that define which image(s) (e.g. RightImages) should be used when a Server is launched in a particular cloud. ServerTemplates published by RightScale will use predefined and tested MultiCloud Images. However, if you are using custom images, you can create your own MultiCloud Image that will point to these other images. The reasons for creating your own MCI can vary. It could be possible that the ServerTemplate you would like to use doesn’t have an MCI that points to a RightImage in a new Amazon region or you might need to use your own image to comply with your company’s policy. The key benefit of the MCI is that you don't have to worry about selecting the appropriate image for each cloud/region when you create a Server. All you have to do is select the region and the MCI will automatically select the appropriate image for you.

Be sure to add the appropriate RightLink tag to the new MCI, which is the last step of the tutorial otherwise scripts will not be executed correctly on the Server.

Typically, you will create an MCI that points to identical images in each cloud. If the images are different in any way (OS, system architecture, etc.) you should create a separate MCI for each type.

In the CM Dashboard, go to Design > MultiCloud Images and click New.

First, you will need to provide some basic information about the new MultiCloud Image.

Select Images for each Cloud

Once the object has been created, you will be redirected to its Clouds tab where you must specify an image for each cloud or AWS region that the MultiCloud Image will support. The required information to complete the mapping will vary depending on the cloud.

If you are adding a reference to a private AMI (that belongs to your AWS account) and plan to publish and share the MCI with another RightScale account, you will need to first privately share the AMI with the other AWS account. 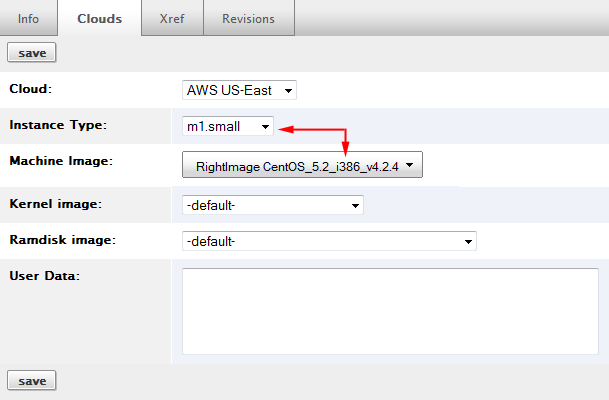 Click the Save action button. Repeat the steps above to add additional images for other clouds.

After creating a new MCI, you must remember to add the following tag so that RightScale will be able to recognize and treat a launched instance appropriately and successfully execute scripts on the Server.

Under the MCI's Info tab, add the following tag:

You can delete a MultiCloud Image (MCI) from a RightScale account. When you delete an MCI, the component will be removed from the RightScale account and will no longer be visible under in the Dashboard under Design -> MultiCloud Images. You should only delete MCIs that you will no longer use in the future. When an MCI is deleted, all previous revisions and HEAD version will be removed.

You will only be allowed to delete an MCI that is currently not being used by any ServerTemplates in the RightScale account.

You can publish and share a MultiCloud Image (MCI) from the CM Dashboard. Typically MultiCloud Images are published and shared in the context of a ServerTemplate, however they can be published and shared individually. You can only publish a private component that was originally created in your RightScale account. (i.e. It was either created from scratch or cloned.) You cannot publish a committed revision of an component that you imported from the MultiCloud Marketplace (MCM). Note: A particular revision can only be published once.

Although you can publish a HEAD version, it's not a recommended best practice unless you're an advanced user that's actively developing and testing it across multiple RightScale accounts. It's recommended that you only publish and share committed revisions of a component.

The steps required to update an imported ServerTemplate, RightScript, or MultiCloud Image are very similar.

The most common way to import the most recent revision of a MultiCloud Image is from the context of a ServerTemplate.