When a CloudApp is launched, or is operated on during its lifecycle, it is interacting with any number of APIs. Most commonly the CloudApp interacts with the RightScale CM API, but it can also interact with other APIs through HTTP functions or, in the future, with Plugins (coming soon).

When a CloudApp interacts with an API, it must use credentials to do so and those credentials are associated with a set of permissions on the external system. For example, if you were to launch a CloudApp, the API calls to RightScale CM API would, historically, be authenticated with your personal account and therefore CM would enforce the permissions that you have.

This page describes a change to how permissions are handled and how to upgrade your CloudApps from the legacy model to the new one.

There are two types of permission strategies in use in Self-Service:

The system impersonates the user when making API calls. By impersonating the user, that user's permissions are enforced by the other system (such as Cloud Management).

Permissions for a given CloudApp fall into two categories: implicit and explicit.

Implicit permissions are those that are generated automatically by Self-Service based on the declarations defined in the CloudApp. For example, if a CloudApp has a Server resource declaration, the system will automatically infer that certain permissions are required on the Server resource in Cloud Management (in this case, specifically: create, launch, show, index, terminate, destroy). Other types of resources may require different sets of actions. All CloudApps are required to have permissions on the Deployment resource, since that is what is created for every CloudApp launch.

Explicit permissions are those that are created using the permissions declaration in the CAT file itself. These permissions must be defined by the Designer if any RCL code is used that interacts with resources in addition to those defined as resource declarations. For example, if the CAT contains RCL code that reads and writes Credential objects, a permisison declaration must exist that specifies the CAT requires read/write from the Credentials resource or else some users may fail to launch the CloudApp.

Today, Cloud Management permissions are managed not at the resource level, but at the Role level. For example, in CM you can't grant someone write access to Security Groups, instead you grant them security_manager role, which allows not only write access to Security Groups, but also a set of other related permissions. When using permissions with CloudApps, the system is able to grant the appropriate roles based on the resources being used. For example, if a security_group resource declaration exists in the CAT, the system will know to grant the security_manager role. Similarly, if a permissions declaration contains read access for credentials, the system will know to grant the admin role for Cloud Management.

Any CloudApp uploaded to Self-Service and published to the Catalog prior to June 24 will not contain delegation capabilities. For your convenience, you can locate these CloudApps by navigating to the Catalog and selecting card view. The cards will show a Legacy permissions indicator to Designers and Admins only so that you can re-upload and re-publish the CloudApp. 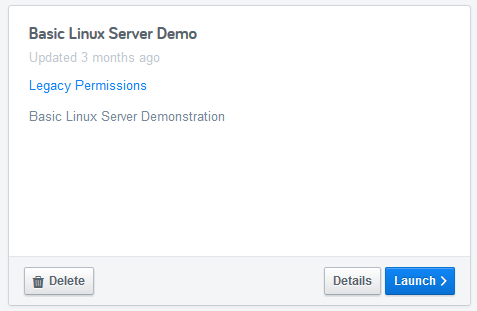 In order to get the benefit of delegated permissions, CATs must be re-uploaded to Self-Service and re-published to the Catalog. Note that if the CAT contains RCL code that interacts with other resources, you may also need to add permissions declarations in order to capture all of the required permissions.